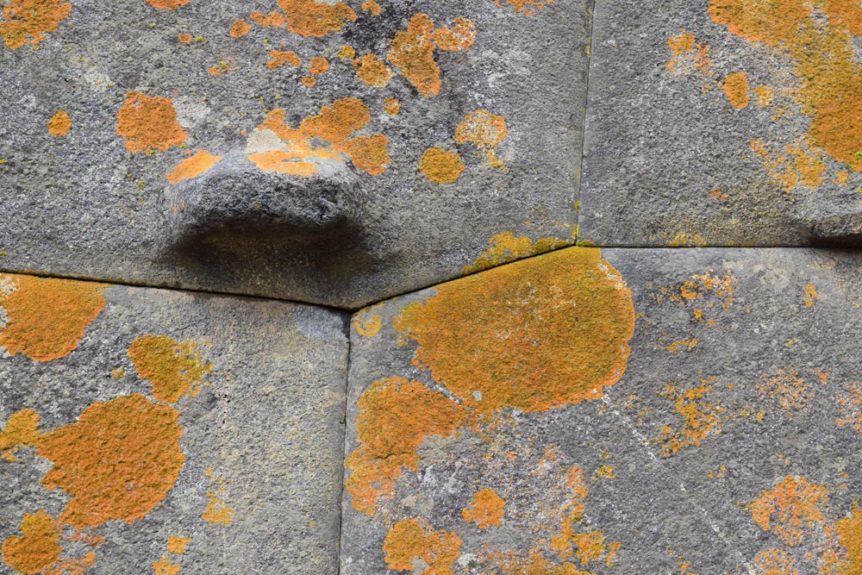 I’ve been on the move a lot over the last few weeks. From the montane ecosystems in the Andes to the low jungle to the high desert (future posts on the latter two to come).

When I was first planning this trip, I thought about including Chile, Bolivia, Ecuador, and Columbia in my itinerary. While I still want to visit these countries, I’m very glad that I decided to spend the entirety of my trip in Peru.

This country is massive. I will leave my two months here with plenty more to visit when I return.

I have crammed my gangly limbs into the seats of a collectivo (15 passenger van popular, a cheap form of public transit) along to Cusco-Valle Sagrado route many times now.

The ride from Cusco to Calca is around an hour, and having been lucky enough to have a home in both, I’ve been shuttling back and forth. Calca has a central position in the Valle, and is a great launch point for adventures there. 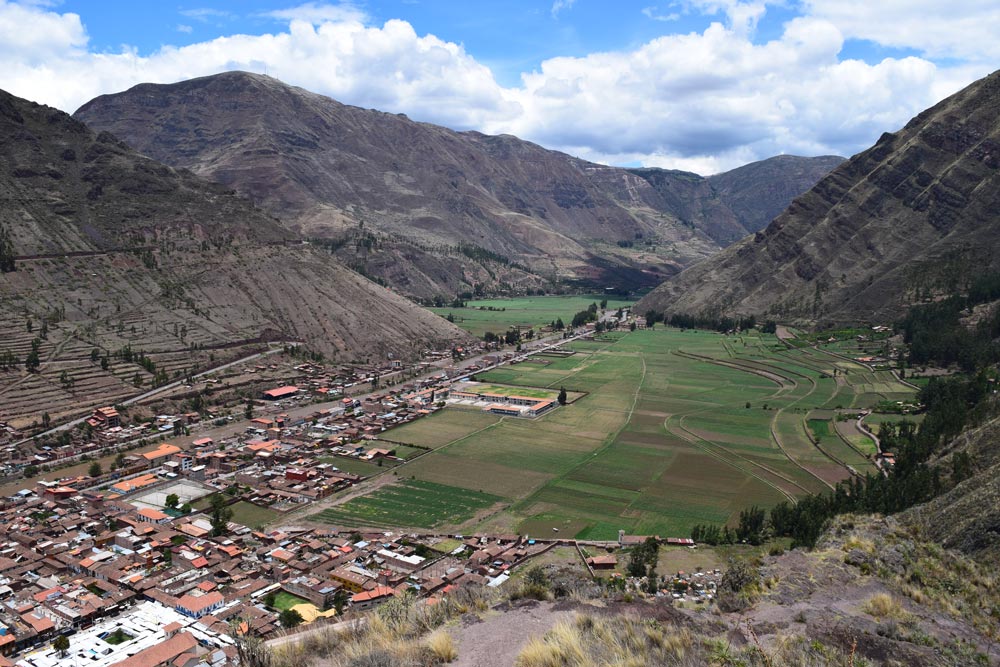 Most famous for it’s Sunday market, Pisaq is the first town you pass on the descent into the Valle from Cusco. It’s also home to an incredible set of ruins that feature terracing, temples, tunnels, and viewpoints. 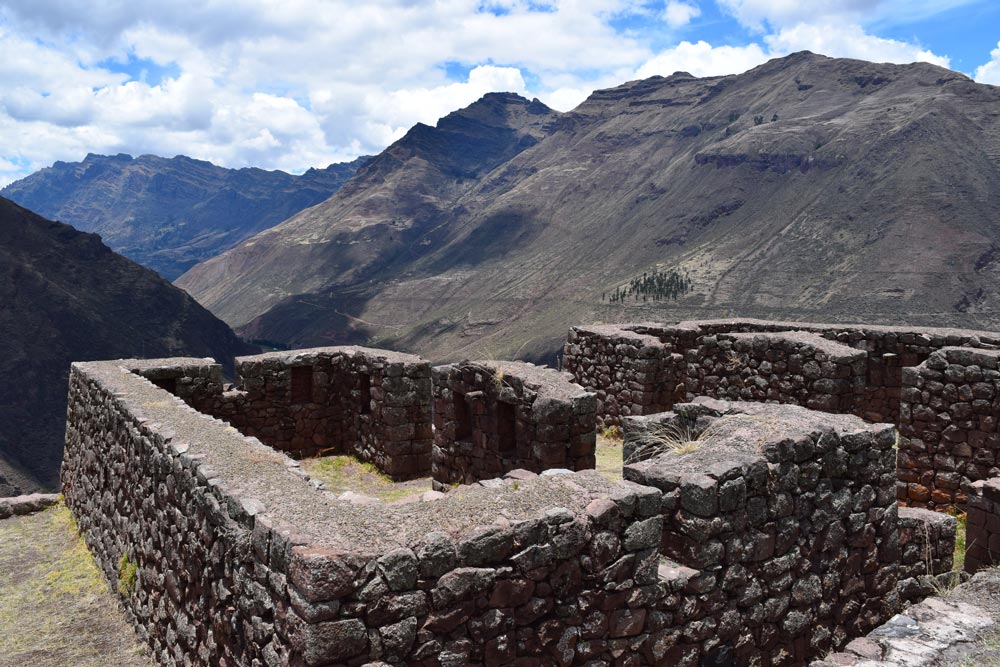 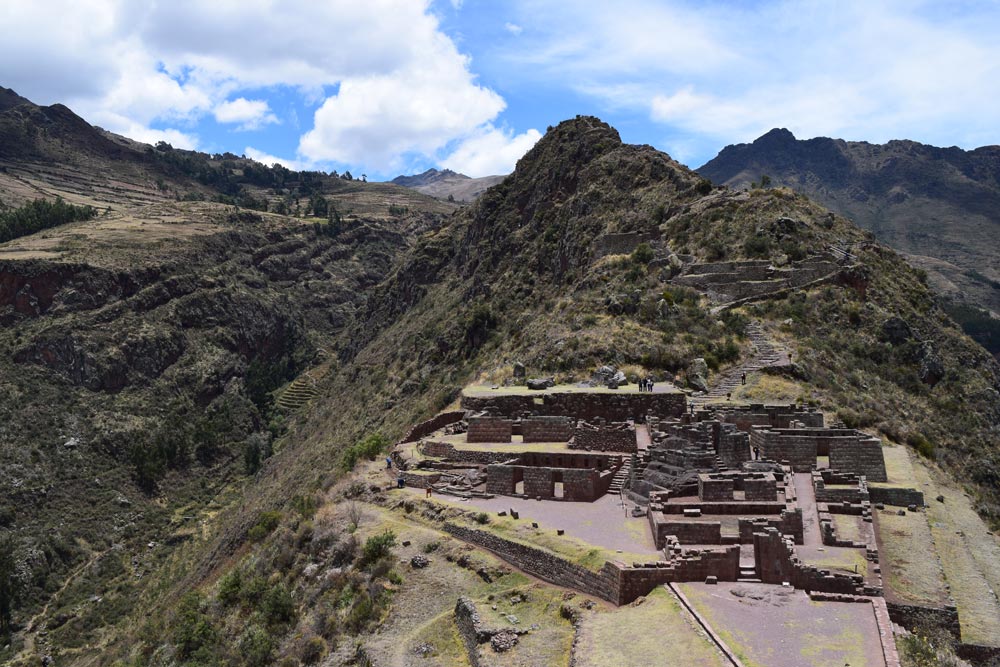 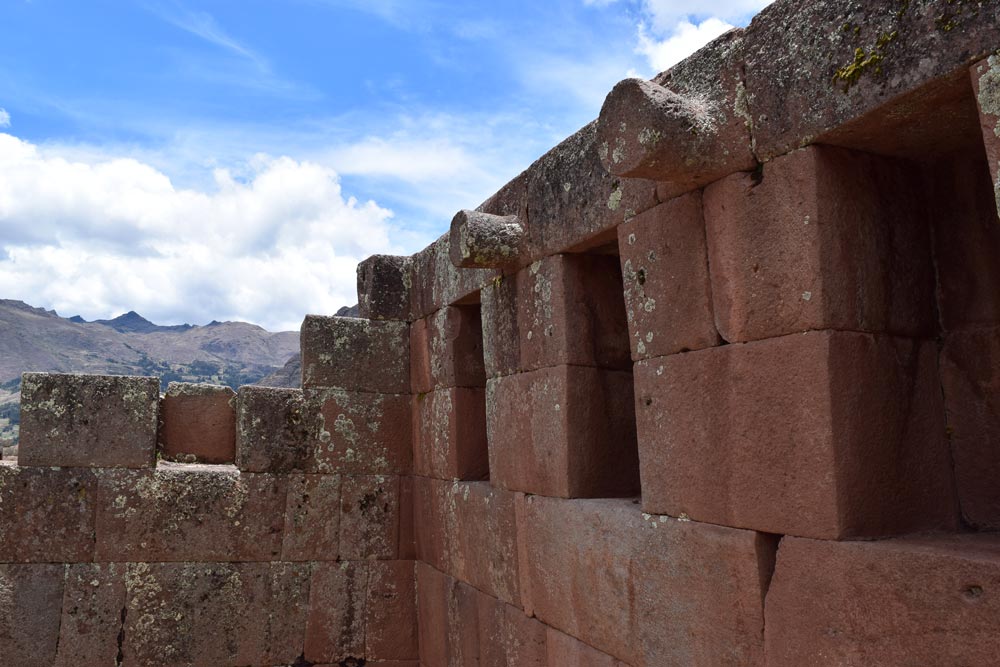 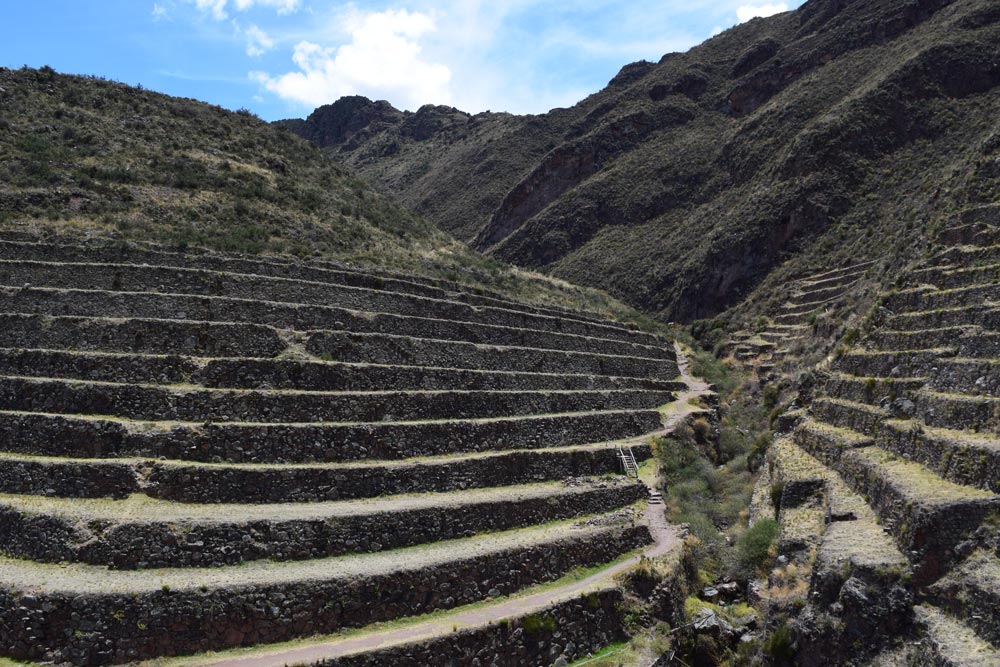 My favorite Peruvian town thus far has been Ollantytambo. It has a fascinating charm and history. Most popularly known as the home to the train station with lines to Machu Picchu, travelers that don’t stay for at least one night here are hugely missing out.

Ollantytambo the only continuously inhabited town laid out as the Incas built it. With beautiful (and durable) stonework supporting the streets, walls, and waterways. This town feels different, and old.

There are also ruins in the hills surrounding the town with exquisite stonework and curious features. 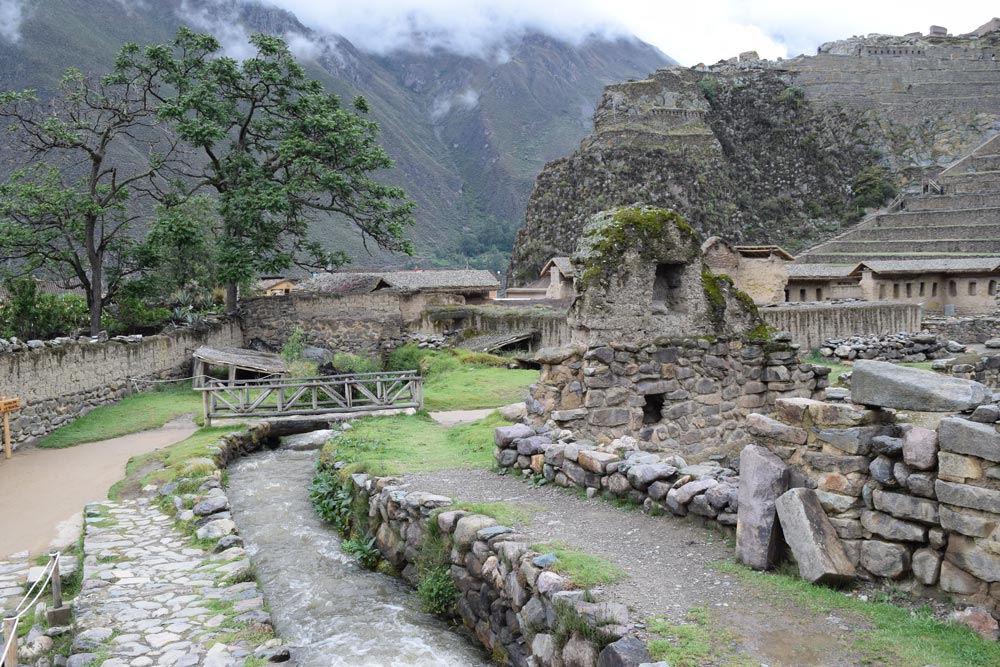 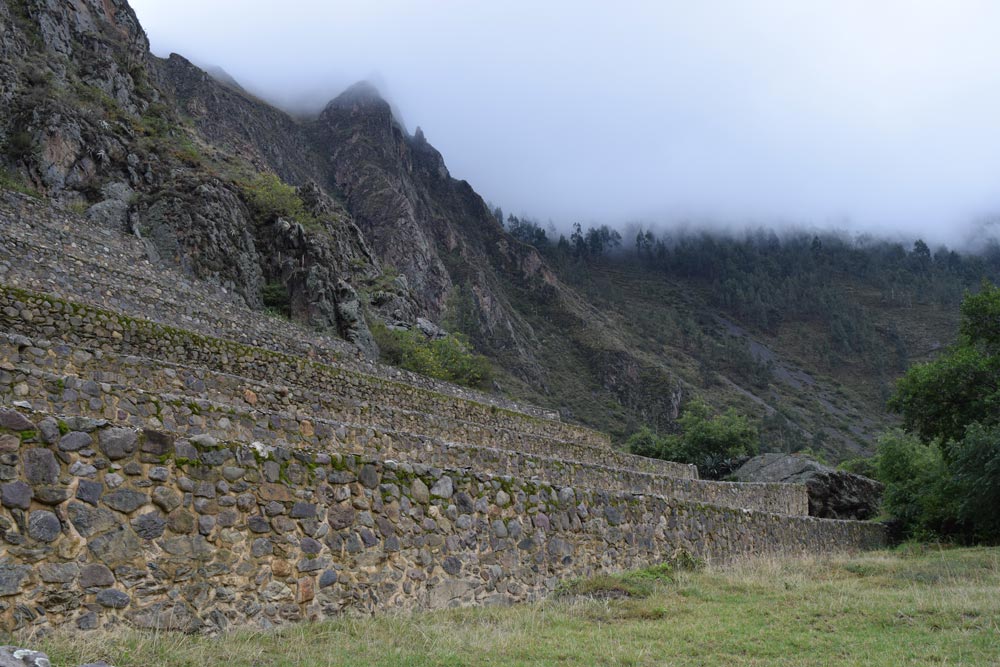 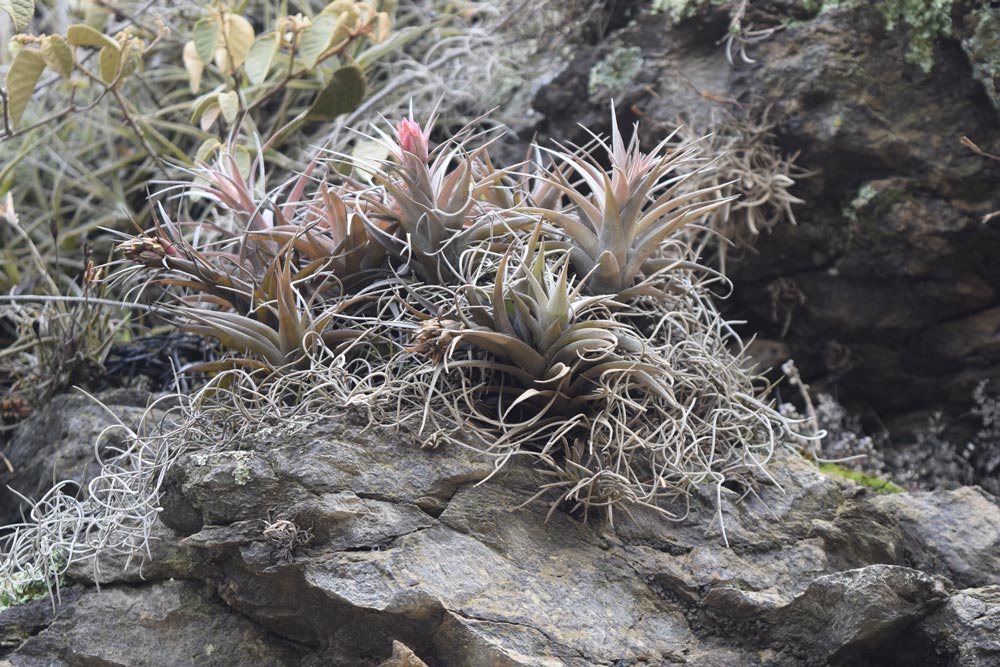 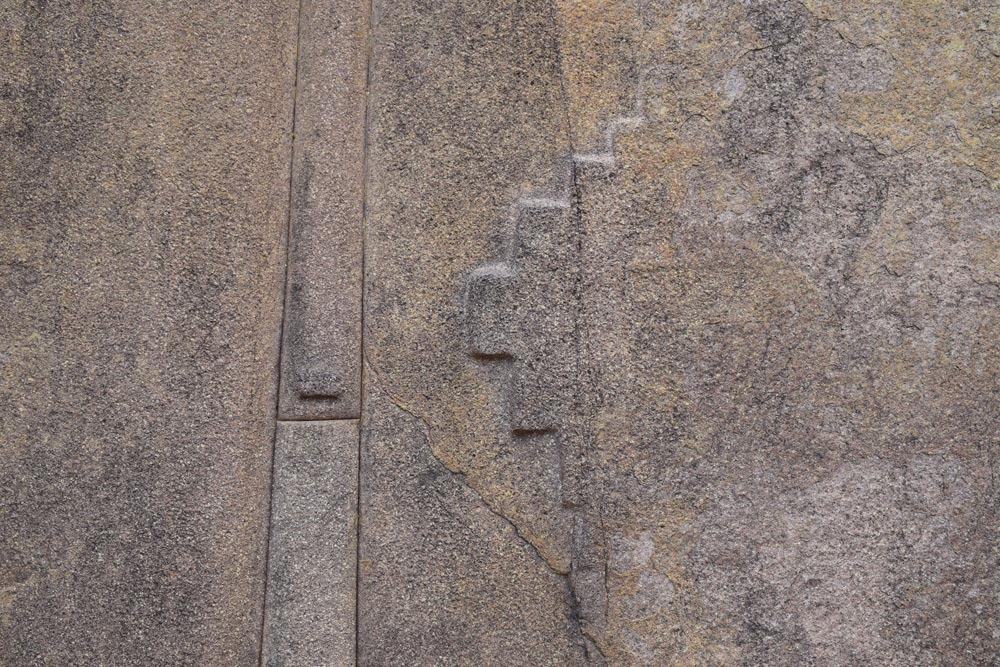 From Ollantytambo I took the train to Aguas Calientes, the launch point to visit Machu Picchu.

That was one of the most gorgeous train rides of my life. Mostly along the Urubamba River, there were endless views of mountains, farmlands, ruins, rapids, and cool plants. I was also lucky enough to sit next to a man who had worked as a guide at Machu Picchu for the last 20 years and who had lots of knowledge about the area and tips for my trip to the ancient city in the morning.

When we arrived in Aguas Calientes, it didn’t take long to realize the town was washed in tourism. I found nearly everything there to be gimickey and overly expensive. But the plants were still cool!

Luckily, however, the bus company anticipates the droves of tourists and sends 5 or so busses in the first wave. So I was able to get up to the ruins relatively early and had a nice solitary hike up to the “sun gate.”

After about 5 minutes of time alone there. I saw a pack of ponchoed hikers emerge from the Inca Trail, clearly unhappy to see that I had beat them to their first glimpse of Machu Picchu.

They weren’t all grouchy, though, and I enjoyed hearing about their last few days on the trail. I would like to do more trekking in Peru someday, maybe including the Inca Trail, but I’m still nursing a bum knee from the Hood to Coast Relay I ran last summer. So for now I’m sticking to day trips.

Due to it’s lack of written history, Machu Picchu remains the subject of mystery and speculation. While the stories I overheard many guides telling were intriguing, I found it more meaningful to just revel at the great unknowns of the ruins. 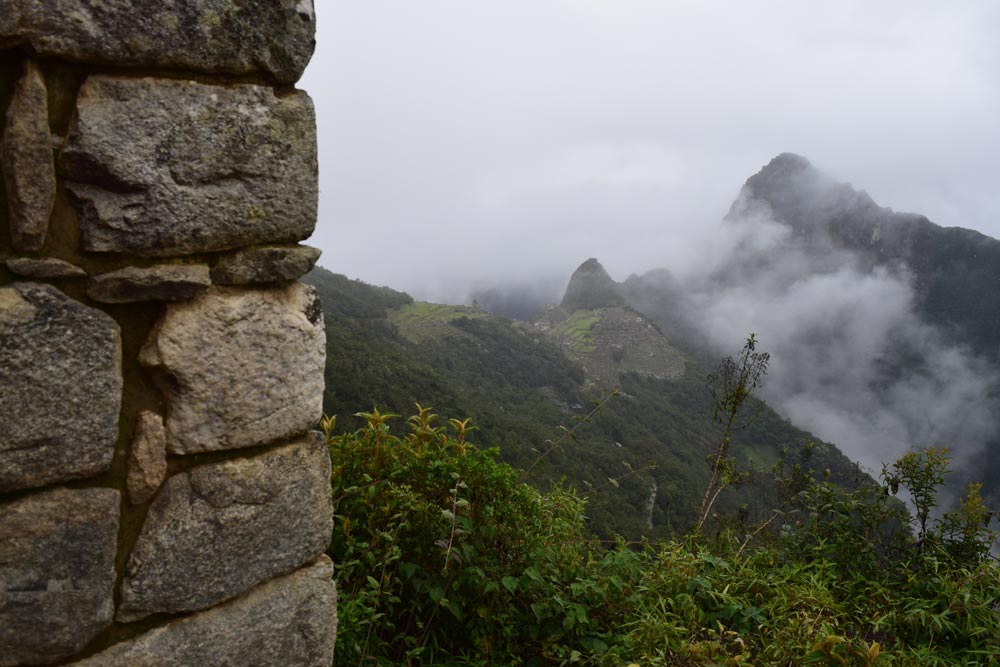 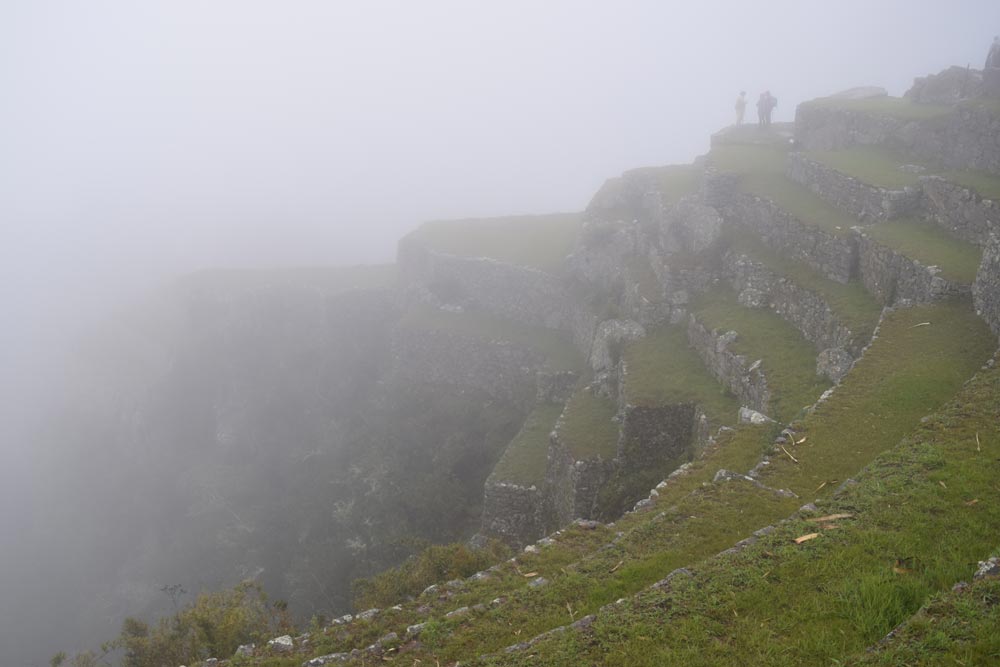 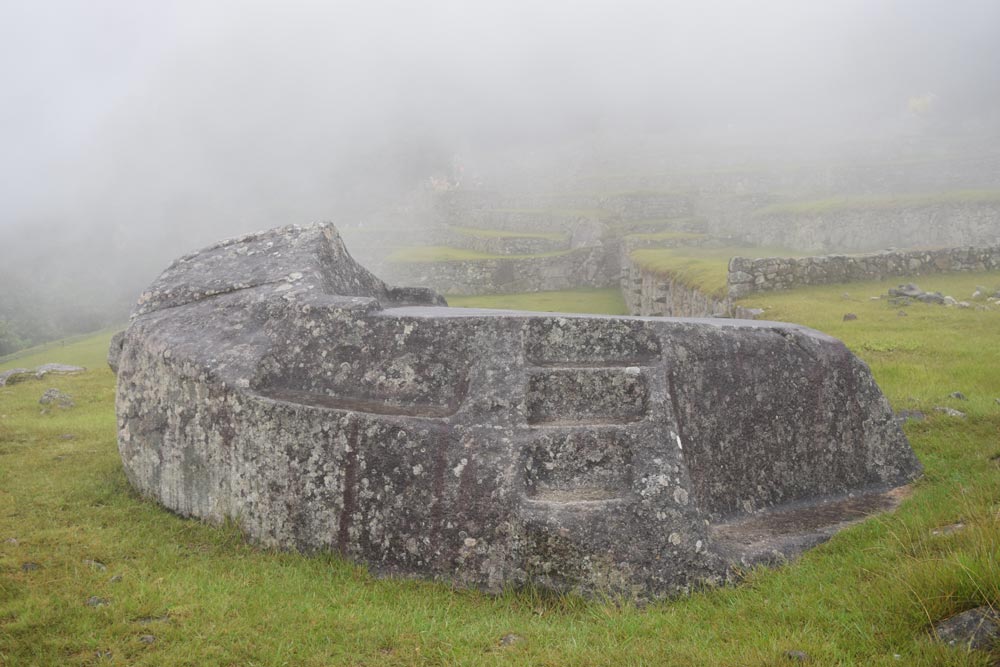 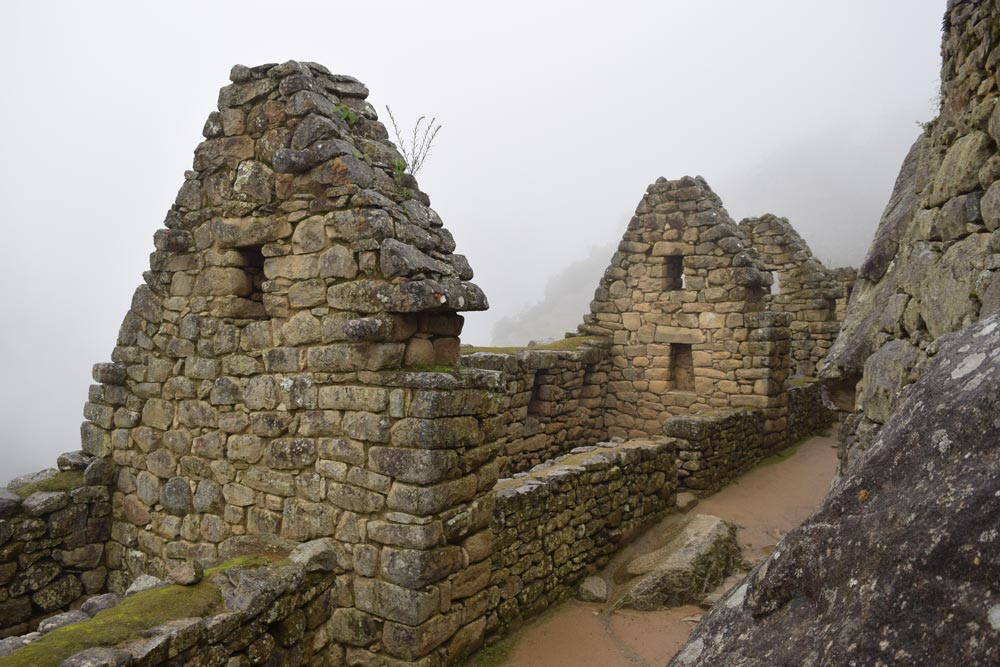 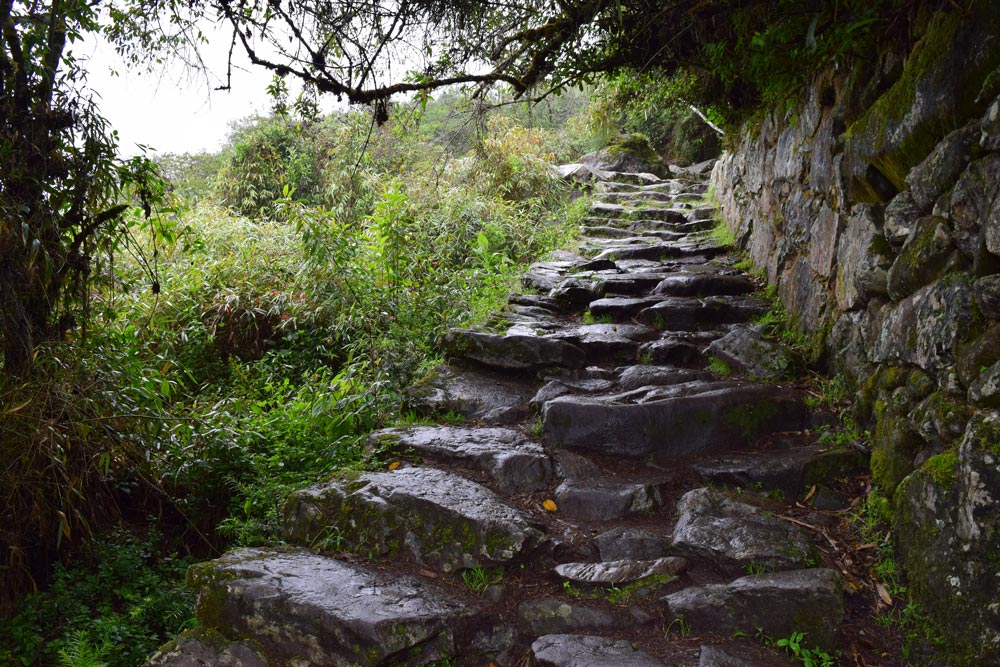 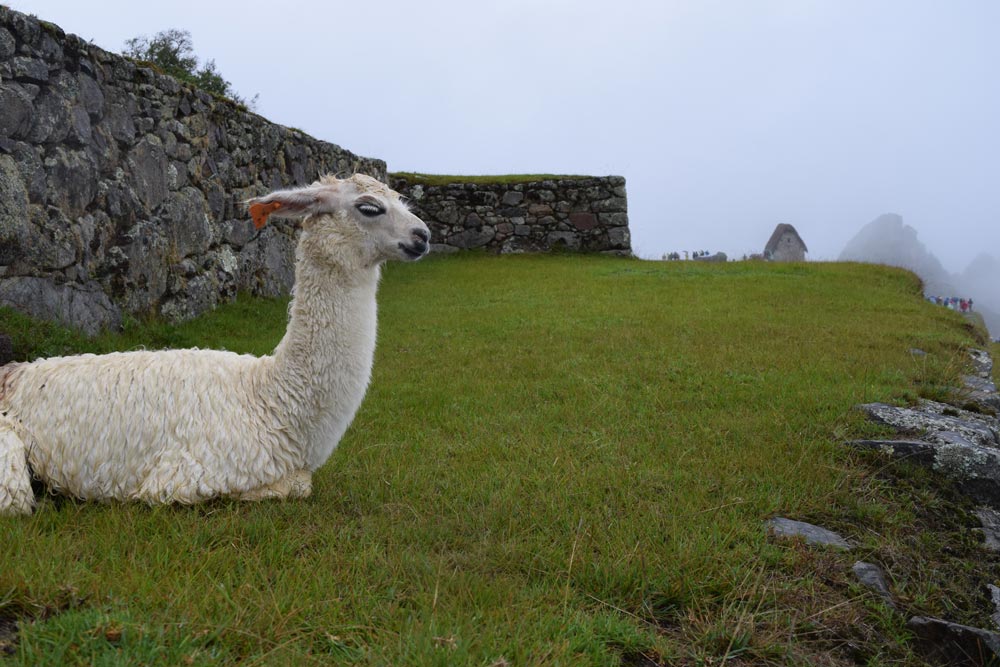 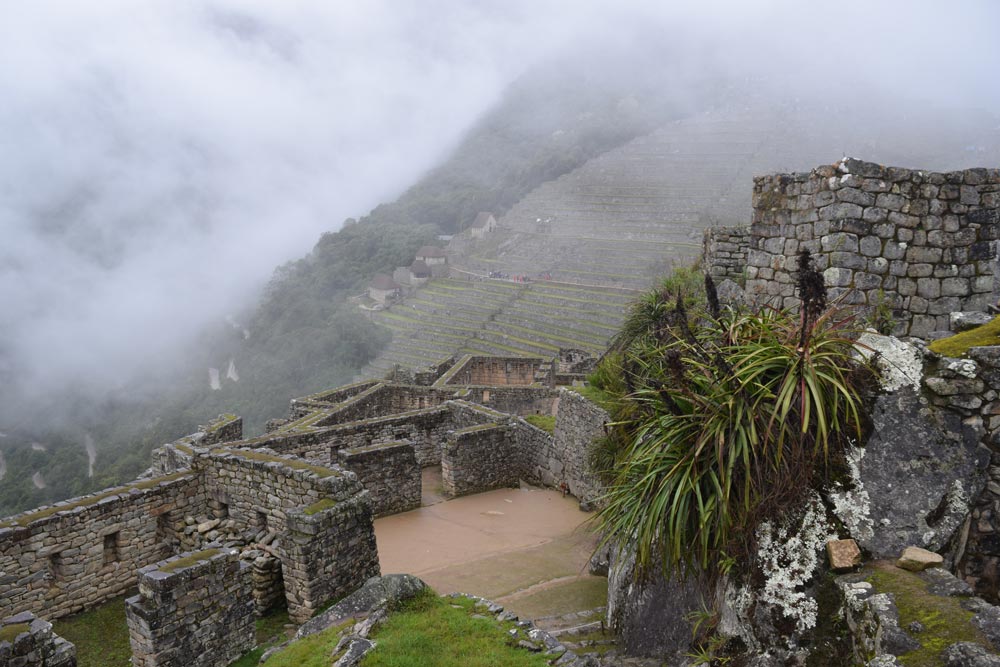 Another great day trip in the Valle was to Chinchero, a town famous for it’s weaving and, of course, it’s Incan ruins.

After catching a cheap and delicious lunch in town, I set off to find my way to Moray. After haggling with some taxi drivers, I was serendipitously approached by a girl who was also heading that direction. Sidney and I got along nicely, and became adventure partners for the day. 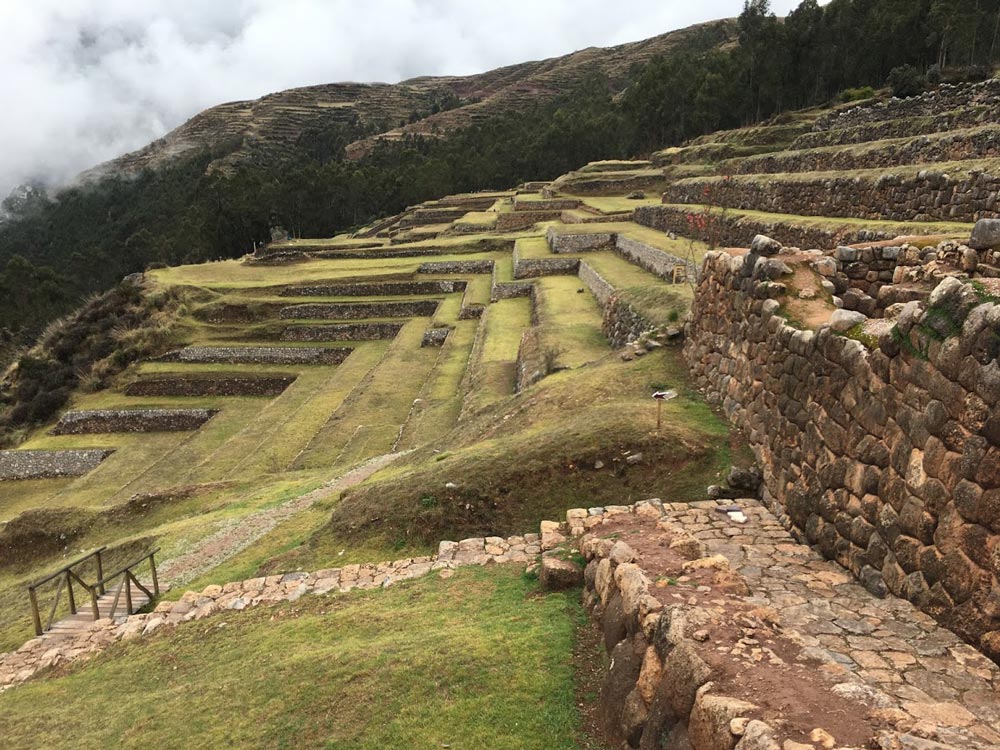 Featuring three great terraced concavities, Moray is a curious place. Supposedly the different levels have different climates suitable to a variety of crops. 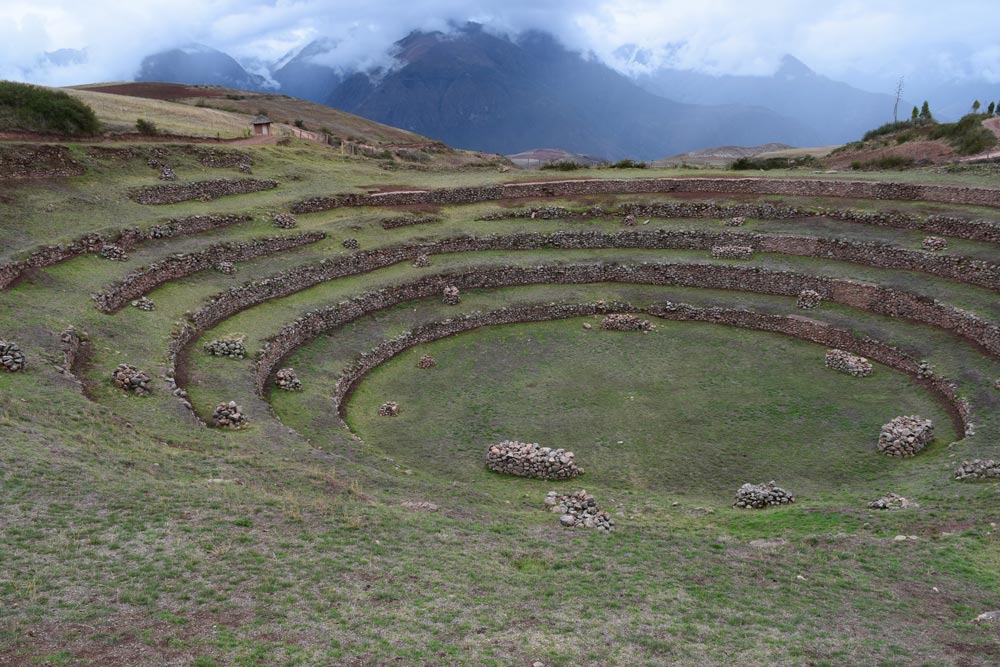 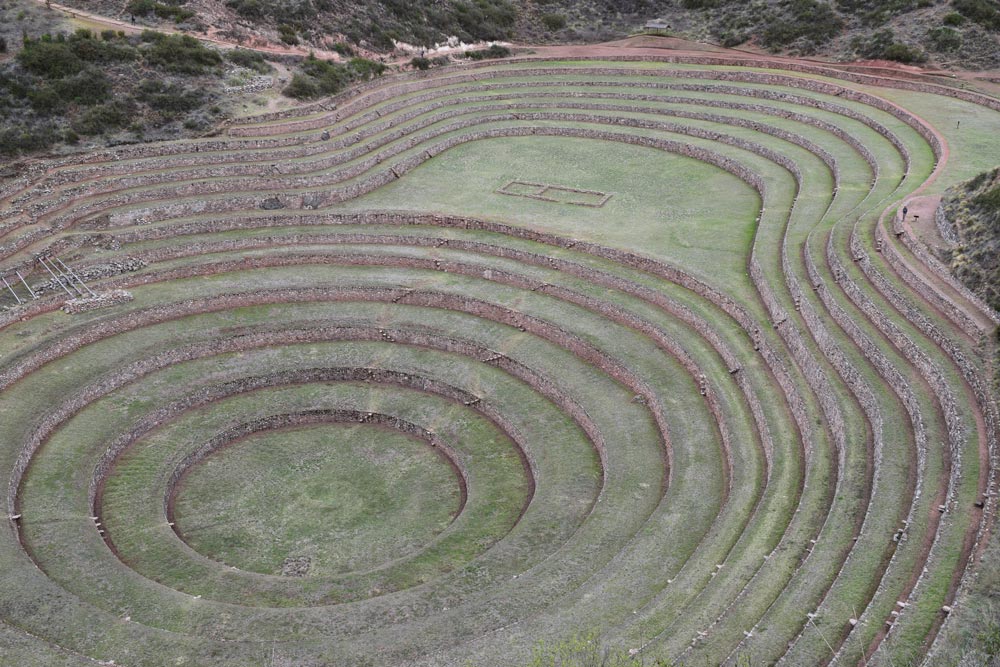 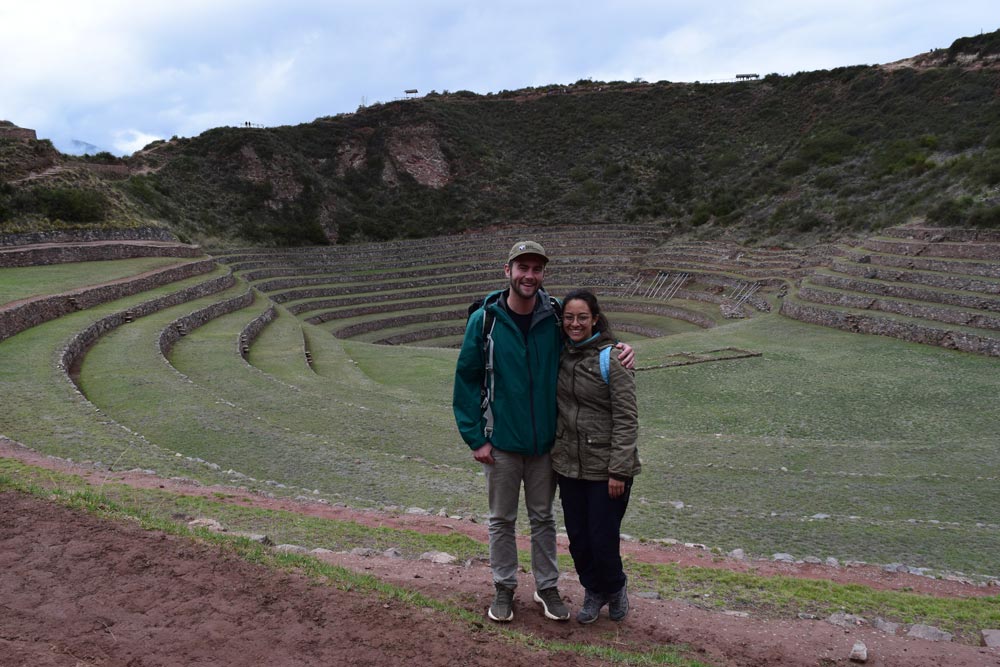 After Sidney and I wrapped our our walk around Moray, we turned out sights on the nearby town on Maras, known for it’s “salineras” aka salt pools.

We had a nice hike through the country with spanglish conversation, and were lucky enough to catch a ride in the bed of a truck for the last couple kilometers.

The salineras were far out. And a very old and sustainable feature of the landscape. The hills have salt trapped inside from when the landscape was the bed of the ocean, and salt is carried out spring water and directed into a series of pools using gravity-fed channels.

After buying several pounds of salt and having more good conversation with Sidney on our walk down to the highway, we caught a collectivo back to Calca for a dinner of caldo de gallina. 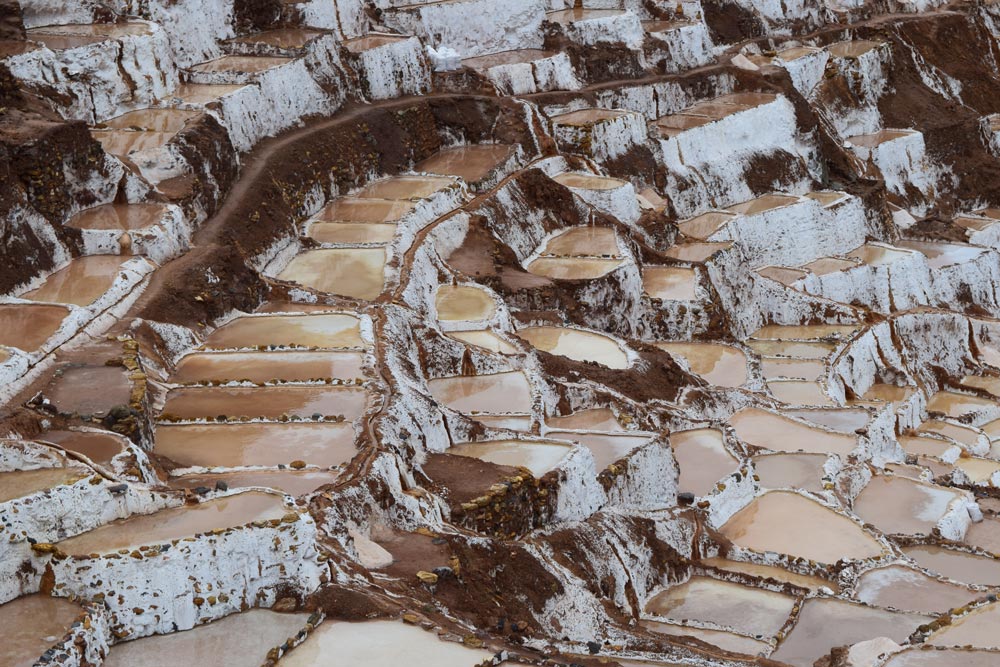 Another highlight of my recent time in Calca was Museo Inkariy. It features rooms about 8 distinct Peruvian civilizations, culminating with the Inca. Each civilization had a room with ethnographical info, as well as a spooky room with a scene with life-sized mannequins.

Overall would highly recommend this museum. The walk there from Calca is also full of wonky plants.

And of course, I had saw plenty of debauchery with the family futbal team. 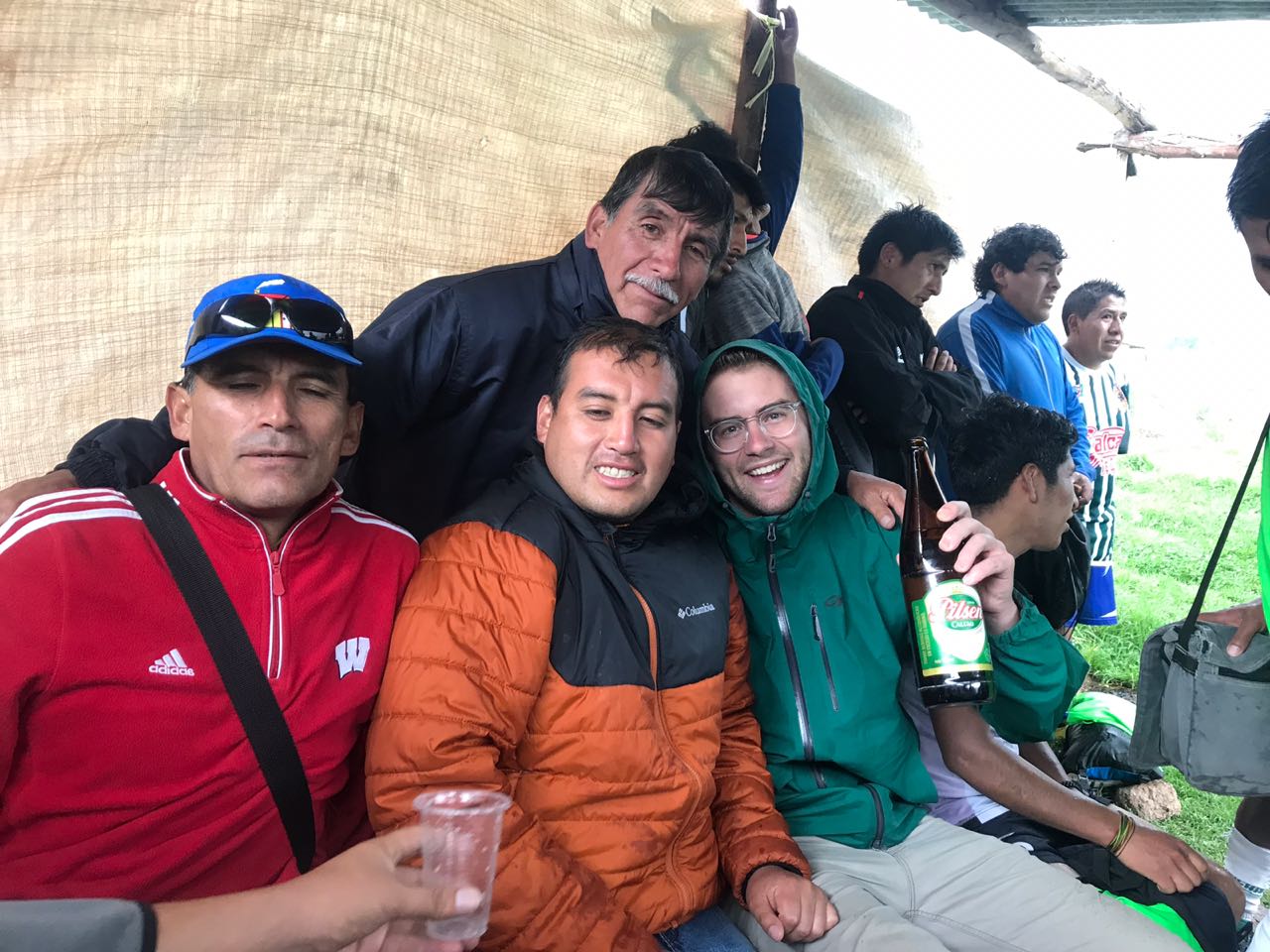 I feel super privileged to have spent holidays with the Alvarez family in Calca. They invited me into their traditions and shared their beliefs for Dia de las Vidas and the following Dia de los Muertos.

The food was stellar. See below our lunch of Chancho (wood oven-roasted pork) and humitas (tamales made with freshly harvested corn). And the funny tanta wawa bread babies also made an appearance. 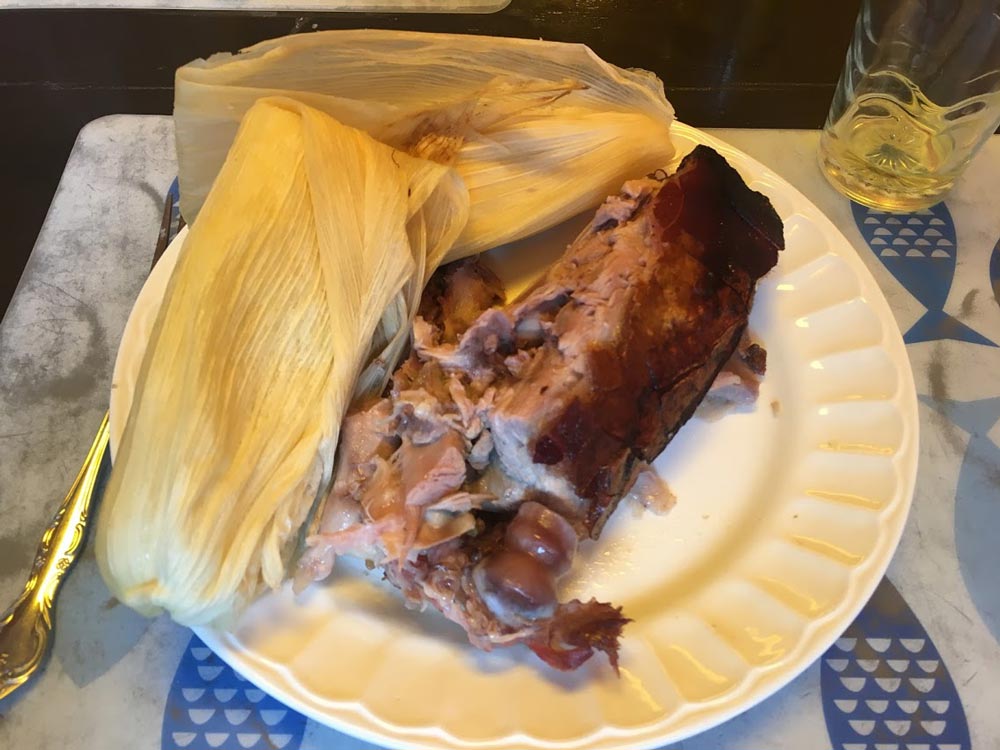 Día de los Muertos was especially interesting. We went to the town cemetery as a family to spend time with Mama Gloria (Amilcar’s sister, Carmen and Rocio’s mother). We brought flowers and decorations for her grave, and made the rounds visiting with other family and community members.

It’s a holiday unlike anything we have in the US, where the whole community comes to the cemetery to spend time with their deceased relatives. There is certainly gravity to the experience, but it’s not somber. People brought out lawn chairs and picnics, bands played huayno music, and beer flowed in circles of reminiscing friends and family.

The next day, we all went to the 50th birthday party in the family. I got the chance to see classic Calcanean birthday festivities and of course make a fool of myself on the dance floor. We ate chanco, rocoto rellenos, and papas morenas (a strangely prepared potato with a rather peculiar taste).