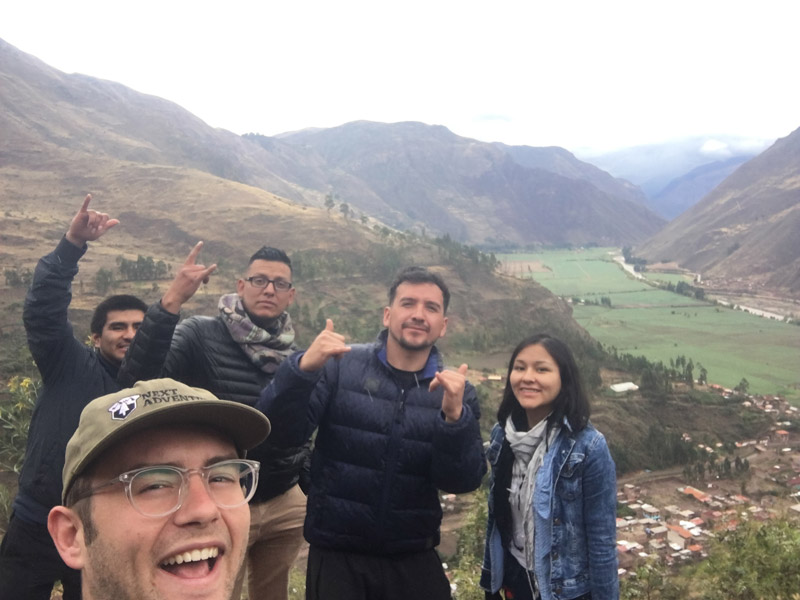 Calca is solace from the bustle of Cusco. By car, you head north through hills studded with Incan ruins, then drop down into the Valle Sagrado, and drive along countless fields and several little towns filled with “cuyerias” and road-side vendors.

Calca is where bakery jefe Amilcar was raised. He still has plenty of family there, and I’ve been so grateful to stay at their beautiful home. I’ll say it here and I’ll say it again, thank you Alvarez family.

When I first arrived in Calca, I was greeted by a warm kitchen filled with all sorts of new smells. Carmen (Stephen’s mom) was busy cooking up a lunch of sopa de gallina and panza frita (chicken soup and fried cow stomach). I was still dying from eating some suspect street food the night before, so Carmen made me my first ever cup of coca leaf tea. Gamechanger. It had a nice mellow flavor, gave me little jolt of energy, and it settled my stomach instantly. Too bad it’s illegal in the US… 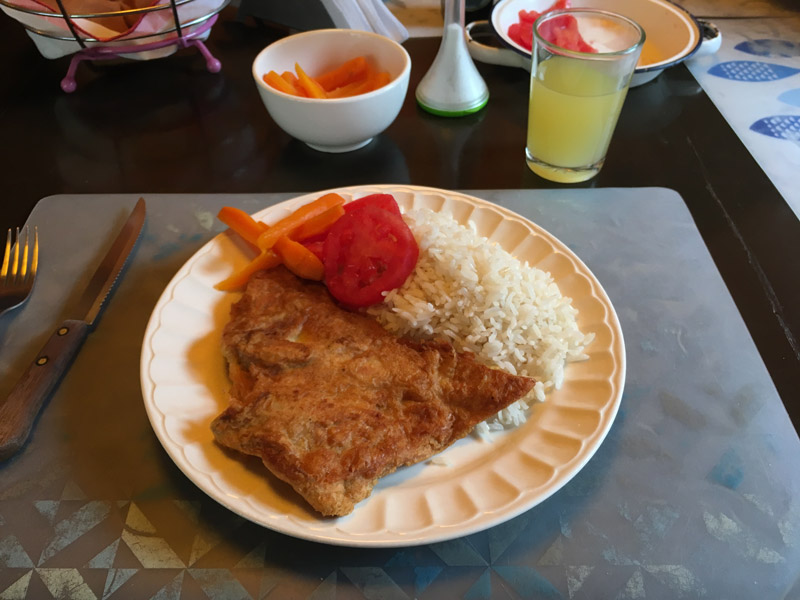 Later that night Stephen and I went to explore the archaeological site of Uru Urco just outside of town. It was pitch black when we arrived, and when we stepped out of the car a pack of wild dogs started howling at us. Thoroughly spooked. But we went in, and Stephen told me all about the ruins. There was a temple and neighboring structures, including a sacrifice altar with a creepy trough for the blood to flow down and spit out of a rock carved to look like a serpent’s head.

The next morning Cristo and I went to visit to local bakery, where I got to geek out with the bakers and gawk at their massive wood fired oven. I’m pretty sure I’ve seen pictures of that oven on the wall at Gabriel’s Bakery back in Portland. 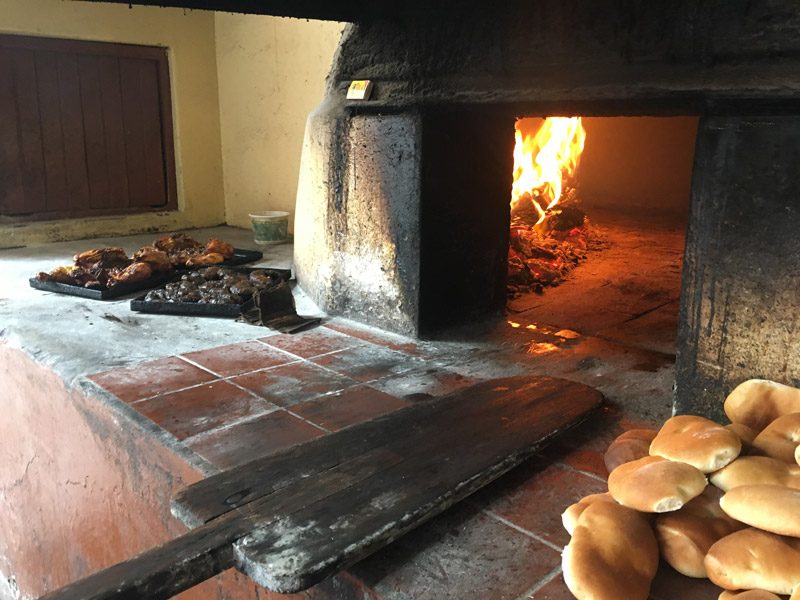 We at the bread paired with Carmen’s magnificent queso andino (a creamy, firm, and sharp cow cheese popular in the region), coffee, and jams of fruits I had never heard of.

After breakfast, Carmen, Cristo and I took the bus to the neighboring town of Lamay to visit a cuyeria and pick up some lunch. 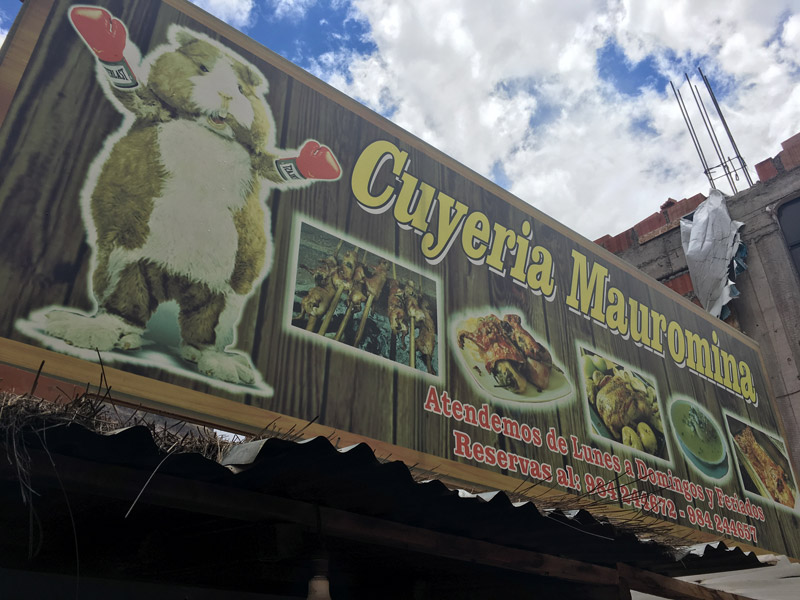 Before eating, I watched Stephen and Pana’s soccer team play on a field with absolutely stellar views. 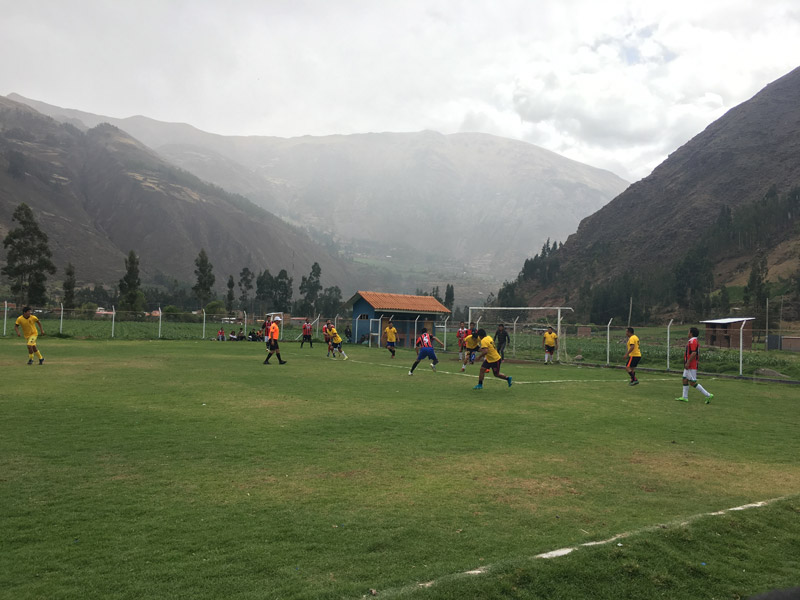 Now back to lunch. Eating cuy, aka guinea pig, is…interesting. It’s a regional delicacy that has been eaten for thousands of years, and has purported health benefits that stave off cancer. Our cuy were stuffed with huacatay (also called black mint) and roasted whole on a stick over an open wood fire. 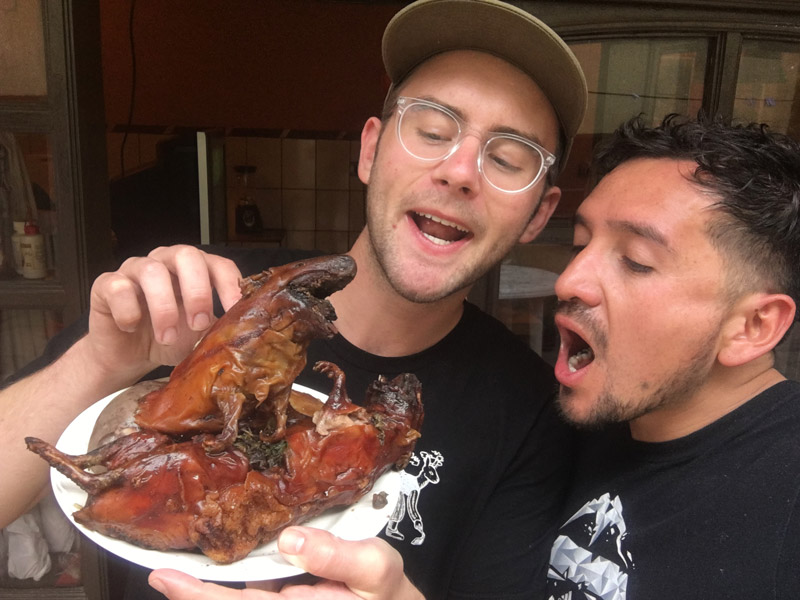 Served with rocoto rellenos (praise be), noodle casserole, and papas, cuy is undoubtedly the star of the show. The appearance is striking – the gnarled mouth, the crispy little claws, the beady eyes – but all in all cuy is rather delicious. It takes some patience and determination to get all of the meat out from between the tiny bones, but the cuy I ate was nice and fatty, not at all gamey. 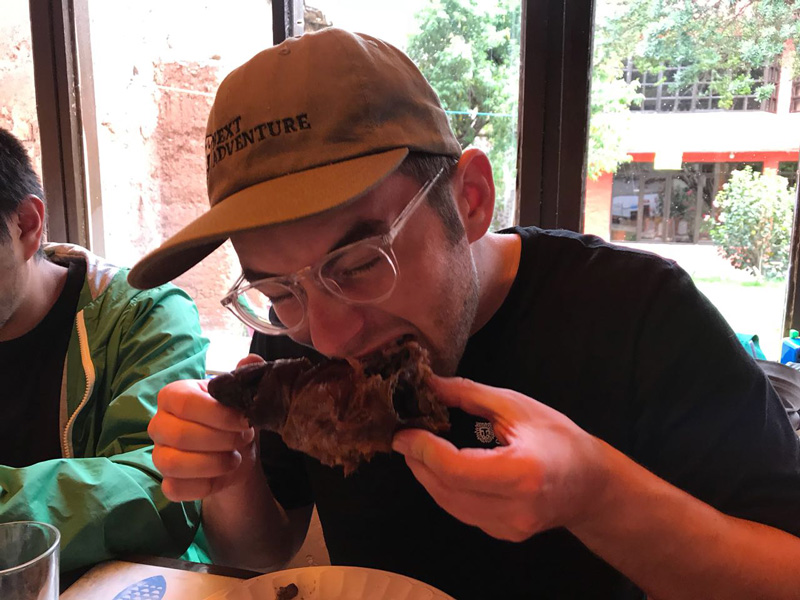 As I’ve come to realize, Peruvian cuisine is much more inclusive when it comes to organs and other parts of animals that American eaters turn their noses at. So of course, my cuy had a delicious little heart, kidney, etc. It also had a brain…which Cristo encouraged me to eat. I cracked open the skull and found a plump white cerebro streaked with purple veins. Never wanting to turn down a food challenge, I took a healthy bite.

Bad idea. I almost threw up at the table. It was awful. Think overwhelmingly salty custard. Thanks Cristo. 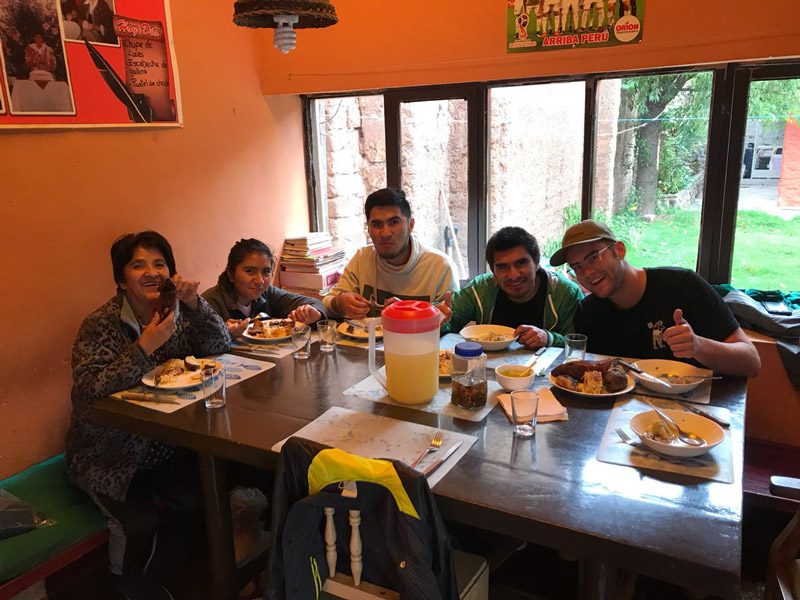 Also jarring, I saw my first “palea de gallos” on that trip to Calca. After our routine of playing sardines in the car on the way, we showed up at a random recycling center outside of town with a bright light in the distance. As we walked toward the light I saw a small arena circled by bleachers and plenty of people gathered around. Like a country gladiator colosseum in miniature.

We climbed the bleachers, shared our whiskey with our neighbors, and settled in to watch the first fight. Feathers flying, people shouting, blood dripping.

I think of myself as a pretty open minded person. I like to approach new things without judgement & see silver linings when possible. But I do not like cockfights.

There are parts that are truly captivating – natural selection in action, the intimate relationship between man and gallo, and the spectacle of watching a struggle to survive.

But for me, every moment of interest was followed by a melancholic silence. The moments that felt the worst were in the fights that dragged on, with both gallos crippled and unwilling to fight. While people around me shouted at the dying chickens to get up, I found myself in an out of body experience wondering what the hell was going on.

Just behind our seats in the bleachers, a team of veterinarians (?) treated the wounded gallos. It was fascinating to see the effort put into those birds, and to watch the aftermath of the fights I had just seen. Overall it a gravity to the evening that I haven’t forgotten since.

But those gallos didn’t scare me a away from Calca! I’m currently back in the valley. I love the rural scene here, and I have a week chock full of hikes to Incan sites and all sorts of cool places.